The Obama Movement is now available for purchase in select bookstores and on Amazon.com. It features a collection of short essays written by students and young professionals who support Barack Obama in his bid for the United States Presidency. One of those supporters is yours truly. 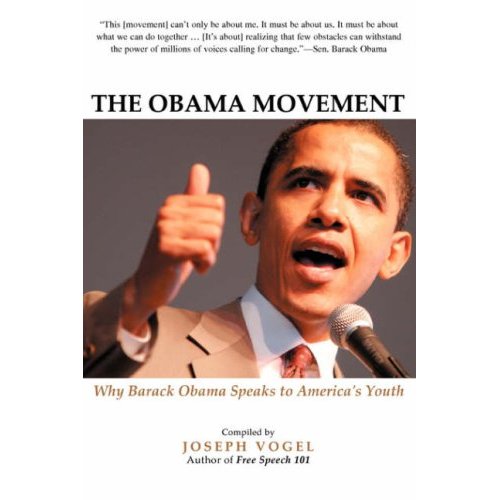 Check out the press release:

A Putnam County native will be published this month in a book that addresses the popularity of Democratic presidential candidate Barack Obama among the youth and young adult crowd. Robby Grossman, age 22, was selected to contribute to The Obama Movement soon after Obama announced his candidacy in February of this year. Created and edited by Joseph Vogel, an author and writing instructor at Brigham Young University, The Obama Movement is a compilation of essays by 25 teens and twentysomethings articulating why they are supporting Barack Obama in his bid for President of the United States.

The book, which is not an official Obama campaign activity, was inspired by Vogel’s frustration that youth interest in Obama’s candidacy was being misinterpreted as shallow or ephemeral. “The media tends to overlook what’s really going on, what the real story is here?” said Vogel. “Young people are making history. They’re organizing, donating, networking and turning out in unprecedented numbers across the country. They recognize the enormous opportunity we have in front of us.”

Indeed, not since the Kennedys in the 1960s has a politician so energized the youth of America. The key distinction is that today’s generation is mobilizing through technology and online networking in ways unimaginable to previous campaigns. Hundreds of thousands of previously turned off young people have tuned into the vision of the former community organizer from South Chicago. Online groups have swelled into the hundreds of thousands, creative ads by supporters have dominated YouTube, and interest has translated into record-setting donations and massive turnouts in Iowa and New Hampshire, Nevada and Texas.

Organizations such as Barack the Youth Vote, founded in early 2007 by Vogel, have built a network of support with the intent of educating peers about Obama, canvassing, registering young voters and encouraging campaign contributions. The Obama for America campaign has embraced the energy and activism of students and young adults to their advantage, organizing Students for Barack Obama and Generation Obama , which now contain over 550 chapters nationwide.

The Obama Movement contains the personal stories of young people in the trenches of one of the most exciting and significant elections in American history, and reveals why they are determined to make their voices count in 2008.

Grossman, a 2007 graduate of Wheaton College, currently works as a software engineer in Cambridge, MA. He has worked for numerous county and state campaigns, including the Whitehouse for Senate effort in 2006.

Vogel, whose book Free Speech 101 was published in 2006, hopes that by giving young people a representative voice in print, he is encouraging all of America to take seriously what its younger generations have to say, beyond the outcome of next year’s elections. “This book is essentially a symbol of a movement,” he said. “Barack Obama has inspired it, but it’s bigger than just him. It’s not his celebrity or his ‘rock-star’ status. It’s his groundup message, his challenge for real citizens participating in a real democracy. It’s about transforming America.”