On the evening of the House health care reform vote, I built didtheypasshealthcarereform.com, a single serve site, to report the status of the bill. Prior to the vote it read “no.” After the bill’s passage it read “yes!,” and celebrated the occasion with randomly-placed animated unicorns (courtesy of Cornify).

I posted links to the site on my Twitter and Facebook accounts. As soon as the bill passed, traffic skyrocketed. 48 hours later, the dust settled. A quick glance at visitors per day shows how quickly the site gained and lost steam:

According to the latest compete.com numbers, Facebook.com gets 6.00 times more traffic than Twitter.com does (as of February ‘10). Theoretically, then, Facebook.com should drive six times as many visitors as Twitter.com.

In reality that multiplier was 4.6, 24% less than expected. In other words, when normalized for total traffic, Twitter.com was over 30% more effective at driving traffic than Facebook.com was. (If that math confuses you, recall that 4 is 20% less than 5, but 5 is 25% more than 4; if that doesn’t make sense, don’t worry, the math is not what’s important).

But that’s just the tip of the iceberg. Most Twitter users aren’t on Twitter.com; they’re using Twitter clients like Tweetie, TweetDeck and Twhirl. Click-throughs from these users show up not as Twitter.com referrals, but as “direct” traffic. And this direct traffic made up 40% of the total traffic.

There’s a caveat: direct traffic is also generated the traditional way, by people typing “d-i-d-t-h-e-y-p-a-s-s-h-e-a-l-t-h-c-a-r-e-r-e-f-o-r-m-.-c-o-m” into the address bar in browsers. Unfortunately there is no method to distinguish these users from Twitter client users. There are, however, a few ways to make educated guesses at the comparative numbers. Each of these methods gives Twitter-driven traffic estimates an enormous boost.

The first way to guess, perhaps least appealing to statisticians and most appealing to philosophers, is simply to think about what makes sense. It makes very little sense for a brand new web site to receive 40% of its hits from people typing the URL into the address bar. This would be plausible for Google, but not for a budding web meme that did not exist a week earlier. 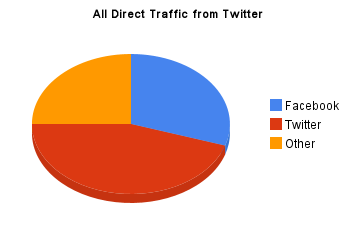 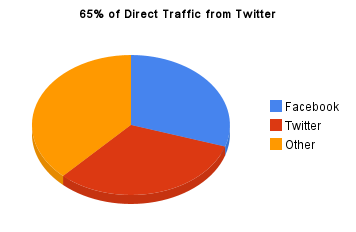 The second way to guess is to look at other sites. One web site I run that doesn’t deal with Twitter in any capacity receives 13% of its traffic “directly.” Another receives 14.1%. If these numbers are typical for non-Twitter “direct” traffic,  then over 65% of the “direct” traffic to didtheypasshealthcarereform.com came from Twitter, putting the total percentage from Twitter above 32%. I suspect the real percentage from Twitter is even greater, because sites earn more direct traffic as they age, and the other two sites are much older than didtheypasshealthcarereform.com. 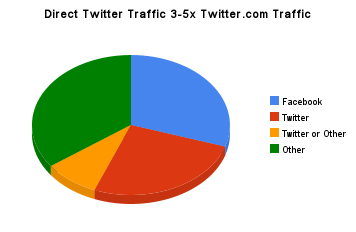 The final way to guess is to look at other people’s numbers. Fred Wilson, with the help of John Borthwick, argues that direct traffic from Twitter is between three and five times that from Twitter.com. This range implies that Twitter drove between 26% and 35% of didtheypasshealthcarereform.com’s total traffic. Splitting the difference comes to 30.5%.

Whether you believe Twitter brought 30.5%, 32% or 45% of didtheypasshealthcarereform.com’s traffic, the conclusion remains the same: not only did Twitter win the battle of relative numbers; Twitter drove more total traffic to the site than Facebook did.

If you know of better ways to determine the source of “direct” traffic, please comment below or send me a link on Twitter.