Nearly all commercial web sites perform Search Engine Optimization (SEO), whereby they alter their site to be more Google-friendly, with the hope of receiving higher search rankings. Many of these changes are purely structural and invisible to users. For instance, using tags like <h1> or microformats like “hreview” can help Google make more sense of existing content without any changes being made to the text.

Mature, profitable sites often take SEO to the next level by altering their visible content as well. In effect, they write their copy for machines instead of for people. From a user experience perspective, it shows. There is often an inherent conflict between what is best for a user and what is best for Google.

An instructive example of this came in a conversation I had with Sachin Agarwal with respect to our page titles at oneforty. The title of our home page reads “Find the Best Twitter Apps.” Sachin argued, correctly, that a better title for SEO purposes would be “Find the Best Twitter Apps and Twitter Tools” because it would match search queries for “twitter tools.” I agree completely with his analysis, but I didn’t want to make the change for a few reasons:

Startups are different from the mature, profitable sites that can afford to play these SEO games in that they are more strictly about solving users’ problems and providing them optimal experiences. Established companies, on the other hand, can make compelling business cases to diminish a user’s experience in order to reach and help a greater number of people. I hope oneforty gets there some day, but until we do, I will tirelessly advocate for a user’s experience over Google juice.

For a more typical example of what I’m talking about, look at the TripAdvisor home page. An easy way to display hotels by city would be to have a heading called “Hotels” and under it list a bunch of cities. Any human could easily understand such a presentation. But TripAdvisor does something different: 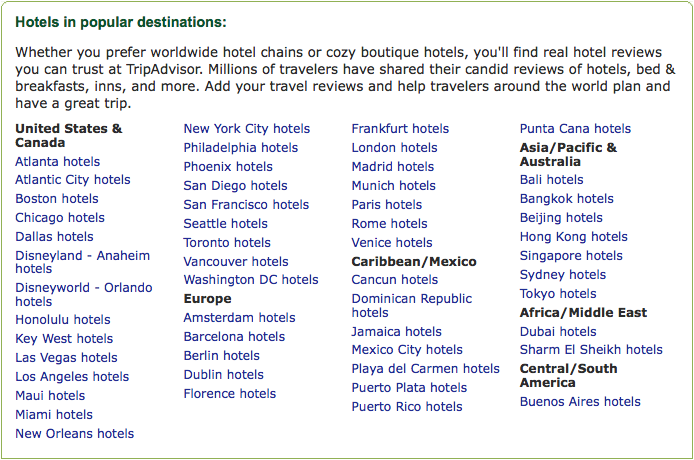 Notice that it repeats the word “hotels” after each city, reading “Atlantic City hotels”, “Boston hotels”, “Chicago hotels”, etc. It does this because it wants to rank highly in Google for queries like “Boston hotels.” If it just used the word “Boston”, Google wouldn’t associate the link with content for a hotel (Google might be able to deduce this, but TripAdvisor doesn’t want to leave that to chance). To Google this is highly descriptive content, but to a person it’s cluttered and repetitive, using twice as much text as needed.

Redundant headings are another common form of SEO-inspired messiness. Headings are heavily-weighted in search results, and so many sites overuse them and cram them with keywords. An example of this can be seen on Yelp’s “Cambridge Restaurants” page. Look at all of these redundancies: 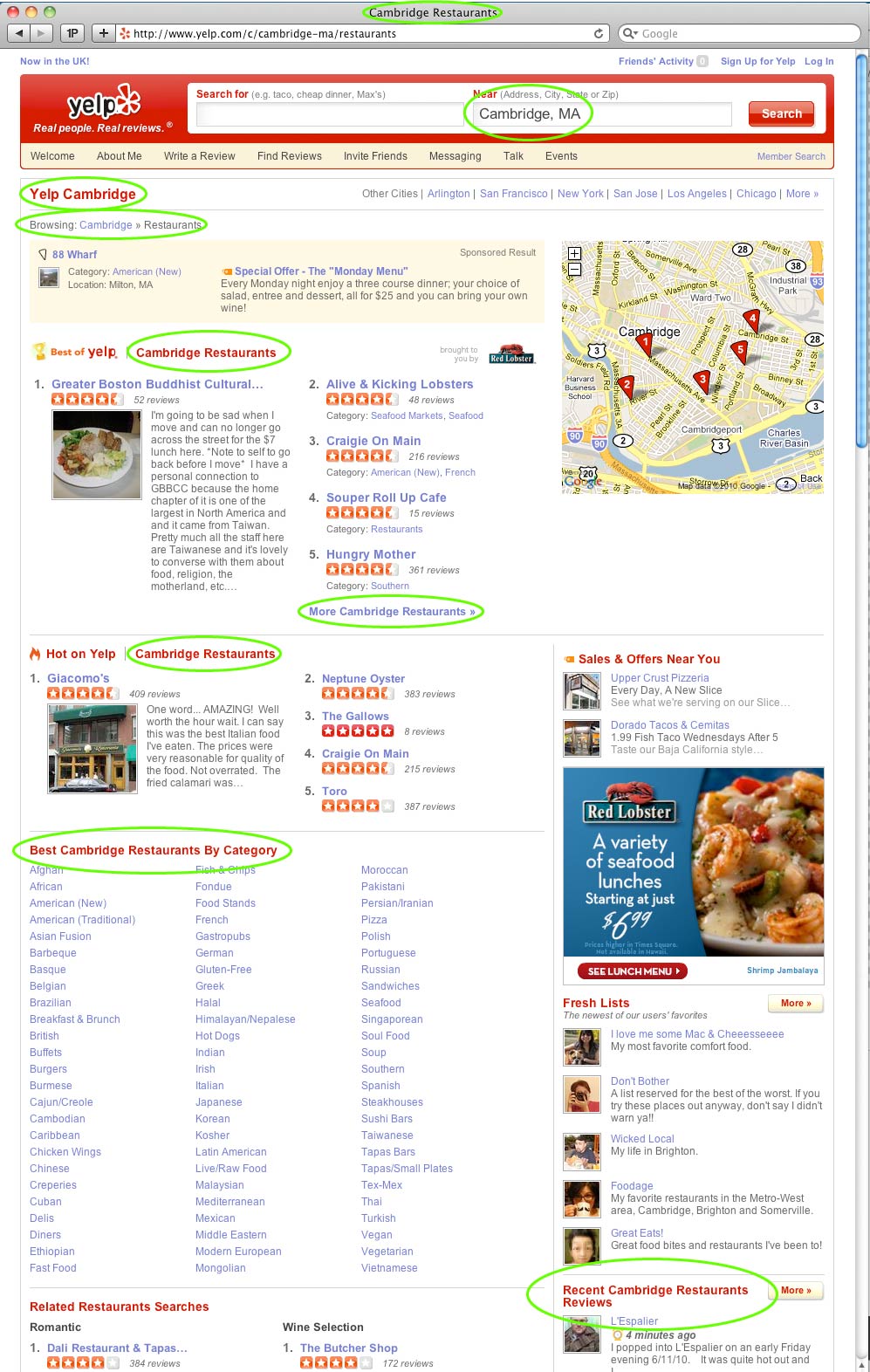 These phrase-based headings work wonders for Yelp’s search rankings, but they make for a terrible user experience. There’s no reason to tell me 9 times that I’m on the Cambridge Restaurants page when I’m the one who searched for restaurants in Cambridge. A title is fine; a heading is fine; but 9 of them is verbose and distracting. To make matters worse, the headings are all so similar that it’s unclear which section actually contains what content. It’s good for Google, but bad for people.

Writing for people is about cleanliness and brevity. Writing for Google requires clutter and redundancy. Startups should write for their users because companies need to prove their value before they market it. Any startup that’s writing for Google is getting ahead of itself.