I picked up “the new iPad” this morning. Here are my first impressions:

The touchscreen and overall UX is a lot more responsive than my iPad 1 (running iOS 5.1). Apps load substantially faster; I would estimate a 4x speedup. I do not own an iPad 2 so I can’t offer a comparison there.

Like I found when upgrading to the iPhone 4, the screen resolution is amazing. The visual difference between icons that are retina display-optimized and the icons that are not is immediately striking.

My only letdown: one of my complaints about my first generation iPad is that the blacks are a bit bright. This is especially noticeable when watching movies. I was hoping that the increased color saturation on the new iPad’s retina display would address this and keep them darker, but after comparing Netflix playback on both of them, I do not see any difference.

The dictation function is very fast. I dictated eight sentences in one take and the iPad had them transcribed in under a second - about as fast as Apple makes Siri look in its commercials. Textual accuracy was near-perfect (it mistook “is” for “in” and “the” for “a”), and could definitely be used for publishing longer form text on the go after a quick proofread.

I have a grandfathered AT&T unlimited data plan from my original iPad. I searched around and called AT&T to verify I could move it to the new one. They assured me I could, and I’m happy to report that transferring it to the new device was fast and straightforward. There were no gotchas or tricks intended to get me to cancel it. My existing plan was selected by default: 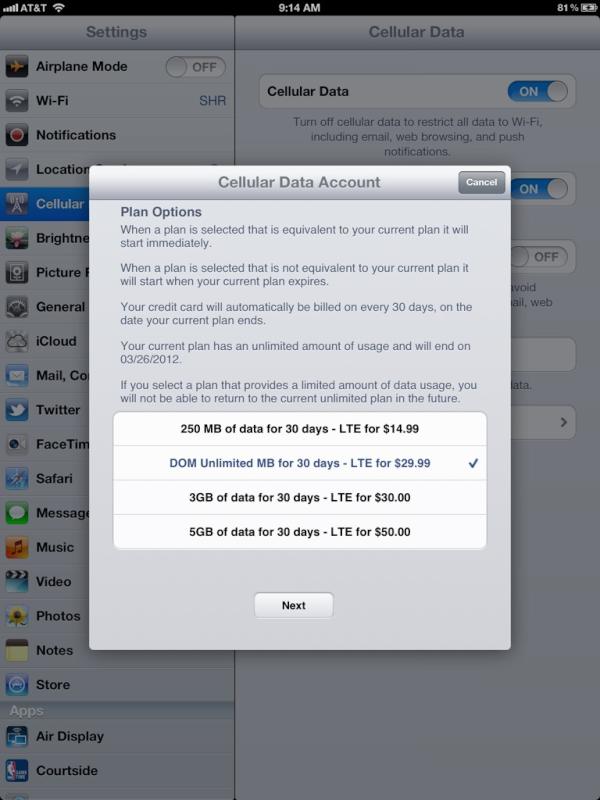 Update: Thanks to @kevinebaugh for pointing out that I initially used the dictation feature incorrectly. I’ve updated the review to reflect how it works when used properly.